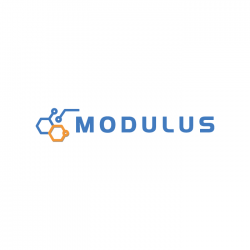 Established in 2016 by Shun Kimura and Kazuki Ohno as a network-type drug discovery venture that makes full use of cutting-edge computational science. Based in Tokyo and Boston, USA, we design low-molecular-weight compounds (dry analysis) on our own drug discovery platform, and acquire experimental data (wet analysis) by utilizing external organizations. With a small number of people operating system specialized in the initial phase of the drug discovery process, we will contribute to the realization of epoch-making drugs while aiming for early license out of new drug candidate compounds. 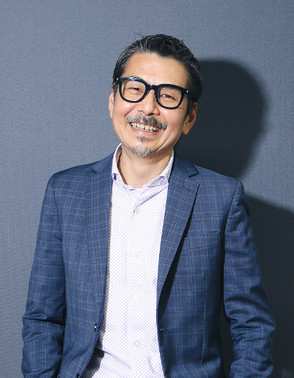 We are a network-type drug discovery venture that builds a drug discovery platform using the latest computational science and technology and designs molecular compounds that are candidates for new drugs. A major feature is that the combination of molecules and proteins can be reproduced on a computer rather than in the laboratory. Furthermore, we have built our own network with universities and contract research organizations (CROs) to develop drug discovery projects and realize a rapid and low-cost development system. Companies that do not have large facilities such as laboratories and work on drug discovery while conducting all necessary experiments at external institutions are called "virtual pharma" and have already played a part in the pharmaceutical industry in Europe and the United States. I will.

So why is such a drug discovery model effective? Traditional pharmaceutical companies have generally been involved in the process from searching for new drug candidates to clinical development, marketing, and manufacturing and marketing. However, in the global market, there has been an increasing tendency to license therapeutic drug candidates from drug discovery ventures over the last 20 years. In recent years, in response to intensifying competition for new drug development, there have been many cases of early signing of license agreements at the lead compound (new drug candidate compound) stage, which is the very early stage of the drug discovery process and the pre-clinical trial phase. ..

On the other hand, in Japan, the main approach between pharmaceutical companies and venture companies is to carry out joint research over several years, including the clinical stage. On the other hand, we would like to breathe new life into the Japanese pharmaceutical industry through a research and development system that focuses only on the preclinical stage, from the search and design of new compounds to the conclusion of licenses. I will.

The weapon for that is our state-of-the-art computational science and technology. Specifically, it creates a virtual three-dimensional structure of the compound and simulates the affinity of binding to the target protein in the body. In the past, organic synthesis specialists used their knowledge and experience to carry out experiments through experiments, but they used supercomputers to evaluate large amounts of compounds and performed complex movements of internal targets that could not be reproduced until then. Precise simulation, including, can improve prediction accuracy and significantly reduce speed and cost. Furthermore, after narrowing down the promising compounds at this stage, a large number of drug discovery projects can be carried out even with a small number of people by outsourcing the synthesis and verification in the laboratory and the safety test for clinical trials to an external organization. It is now possible to go.

On top of that, our technology has two major strengths. One is a simulation technology that makes full use of molecular dynamics calculations. This is a method of dynamically verifying whether a candidate compound binds well to the action of a protein that causes a pathogenesis. Although "still images" have been used in conventional technology, we accurately reproduce the dynamic structure of compounds and target proteins in the living body, so to speak, fluctuations in water, and predict the affinity and activity of both. I am doing. Since it is a dynamic analysis, it requires a huge amount of calculation and requires a large cost, so it is a technology with high hurdles for major pharmaceutical companies to introduce on a large scale.

The other is the difficulty of performing this simulation analysis with high accuracy and stability. Accurate analysis requires strict protocols such as environment settings, but since this protocol has not yet been established in the industry, advanced experience and know-how are required. In that respect as well, we have established our own protocol and established a high-precision and high-throughput simulation method.

These efforts largely reflect my experience in computational science, drug discovery, and disease biology. After working at Boston University, Massachusetts Institute of Technology, and a drug discovery venture based on genetic information, he was involved in drug discovery research at Bristol Myers Squibb, a major American pharmaceutical company, and returned to Japan in 2013. After that, I was involved in a number of joint projects at Schrödinger's Tokyo branch, which develops and develops software for chemical simulation, and after having dialogues with pharmaceutical companies, the computational science industry, and investors, I gained some conviction.

There is still a big gap between Japanese academia and industry. If you bridge this groove, you will surely be able to realize great potential. This is because in the United States, many researchers in the fields of computational chemistry and drug discovery have set up venture companies themselves, and research institutes such as universities and pharmaceutical companies have become two wheels and are making great progress. However, in the case of Japan, despite the fact that excellent research is being conducted worldwide, the knowledge and technology are not applied industrially and remain asleep.

If you connect the basic research of a university with the seeds of a major pharmaceutical company, the seeds of a major pharmaceutical company, and the technological seeds of a bio-venture, and then combine them with the cutting-edge computational science that I have been involved in, great power will be created. With that in mind, we co-founded Modulus in 2016 with Kazuki Ohno (CEO), who has been working on unique IT drug discovery such as utilizing the supercomputer of Tokyo Institute of Technology. 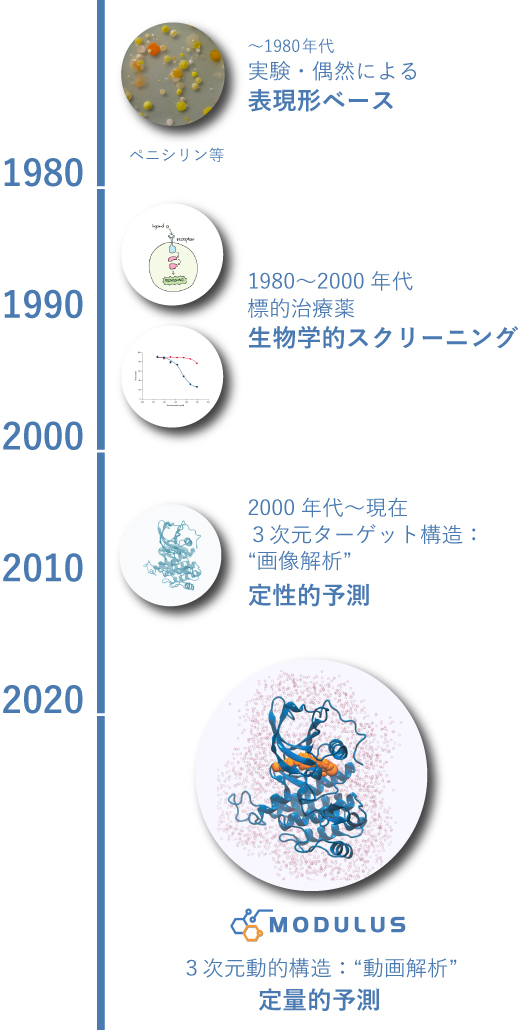 The figure which showed the progress of the search approach to a new drug candidate compound. Modulus has established an innovative technique for dynamically simulating the three-dimensional structure of compounds and target proteins through molecular dynamics calculations.

As for the internal system, in Tokyo, we are promoting project management while developing a network with scientists and engineers centered on Ohno, and in Boston, we are developing a network centered on the latest computational science field. We have a global system of research and development, such as outsourcing compound synthesis, evaluation, and screening to overseas institutions.

Many joint projects have been launched so far, and the circle of collaboration has been expanded, including business alliances with the drug discovery ventures PeptiDream and Astellas Pharma from the University of Tokyo, and a project with Keio University. .. KII was evaluated for these efforts and the potential of virtual pharma in Japan, and in May 2008, we received an investment. Keio Yukichi Fukuzawa encourages "practical studies" that contribute to society, and has made great achievements as a supporter of modern medicine in Japan. From that perspective, KII's support is very encouraging and I am. It is a great encouragement for me. 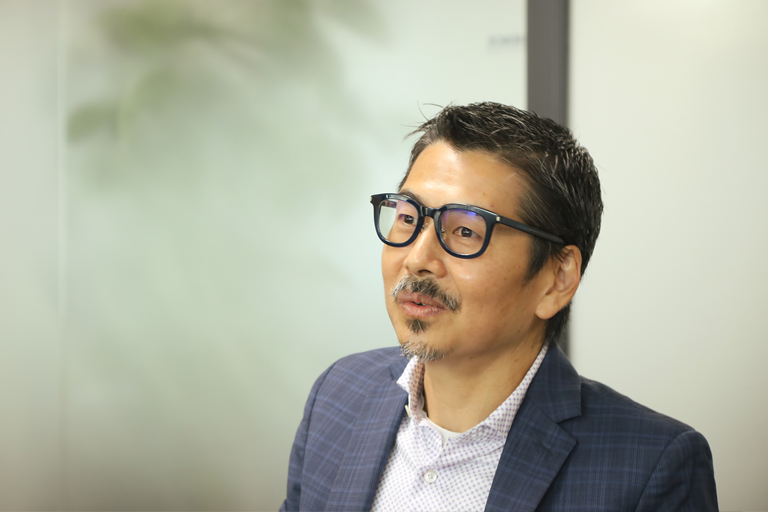 In addition, it is essential for our network to have partners who share awareness of issues and open up new paths. The pharmaceutical industry faces major challenges, including the delay in digitization in Japan. One of them is the problem of drug prices due to huge development costs. It is said that there are dozens of examples of practical application in general drug discovery projects, but the cost of that amount pushes up the price of drugs in circulation and is a barrier to popularization and development. By introducing our technology here, by narrowing down the compounds with excellent physical characteristics by simulation, the development speed and the probability of success of the project can be greatly increased, which can contribute to cost reduction.

On top of that, we are focusing on the discovery of new small molecule therapeutics. Since low molecular weight drugs are composed of small molecular weights, it is said that effective internal targets to which they bind are being depleted. This has become a common recognition in the industry, and many pharmaceutical companies have begun to focus on the development of polymer drugs and antibody drugs centered on biopharmacy. However, small molecule drugs have advantages such as simple molecular structure, easy production, long shelf life, and prescription as swallowing drugs. And drug discovery methods using computational science have opened up new avenues for the search for low-molecular-weight compounds that have not yet been discovered and are still buried. At our company, about 10 drug discovery projects are underway for cancer and chronic diseases, and in the medium term, we plan to bring these into clinical practice through the conclusion of a license with a global pharmaceutical company.

Delivering new medicines to people in Japan and around the world who need them faster and more easily. The technology cultivated based on that desire and the irreplaceable network are the driving forces of us.