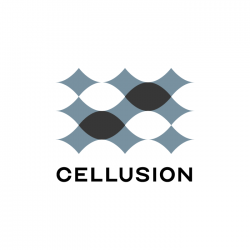 Established in 2015 by Shin Hato, a specially appointed lecturer at Keio University School of Medicine. We will promote the practical application of treatment technology using iPS cells for the eye disease "bullous keratopathy" that requires corneal transplantation. By producing alternative cells for corneal endothelium from iPS cells to replace the chronically deficient corneal for transplantation, and with a safer and less burdensome treatment method, the number of patients waiting for transplantation is estimated to be 13 million worldwide. Aiming for a solution.

However, we believe that this problem can be solved by regenerative medicine using iPS cells. Specifically, iPS cells are used to produce alternative cells for the corneal endothelium, and the cells are transplanted into the eye. In surgery, cells are simply injected with a syringe, and the cells settle in the cornea by gravity if they maintain their prone position for 3 hours after surgery. With this treatment method, iPS cells can mass-produce corneal endothelial cells for the above three conditions, and there is no need for a specialist or specialized facility for corneal transplantation, and treatment is possible at clinics. It will be possible to implement it all over the world because it does not require the donor's eyeball and no eye bank system. 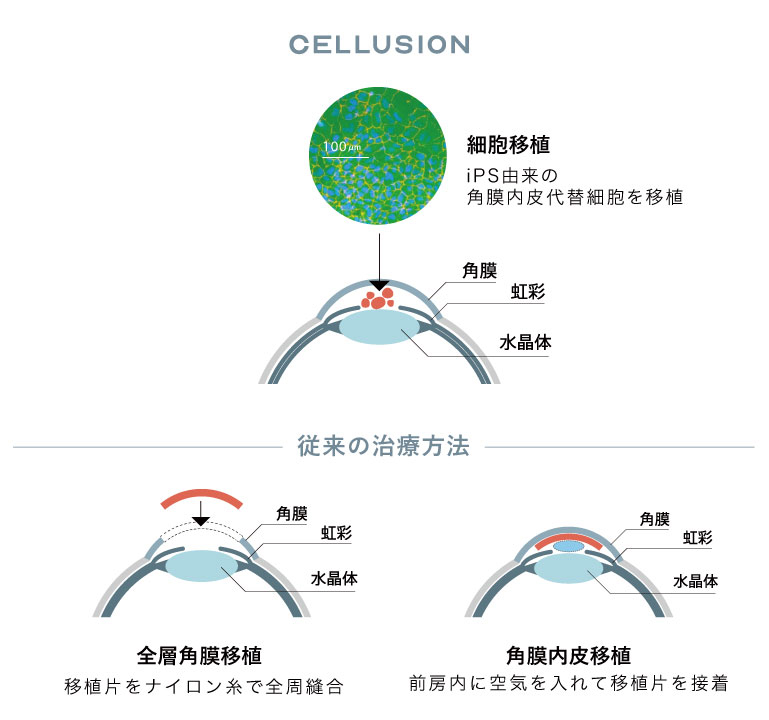 As an ophthalmologist specializing in corneal transplantation, I have been studying this epoch-making treatment method with Professor Kazuo Tsubota and Associate Professor Shigeto Shinmura of the Department of Ophthalmology, Keio University School of Medicine. The surgical method of injecting cells into the patient's eye with a syringe and fixing them to the corneal endothelial cells has been created in the research of a preceding group such as Kyoto Prefectural University of Medicine, but in our case, it is a donor eye. The point is to use alternative cells derived from iPS cells instead of endothelial cells collected from. While I was convinced of the effectiveness of this treatment through research, I gradually came to think that the power of academia alone could not achieve social implementation, and I founded Selusion in 2015.

However, when it was first established, it was a series of hardships. At that time, there was almost no precedent for startups by faculty members of Keio University School of Medicine, and it was necessary for the university to improve the system as to how to manage such attempts as an educational institution. We also welcomed iPS Portal Co., Ltd., which is working to promote the commercialization of iPS cell technology, as a shareholder, and with the support of it, we were introduced to KII while trying to solidify the way the company operates. That was December 2017. Since then, KII has been supporting not only the financial aspect but also the organizational aspect and company management, such as the addition of staff as outside directors.

Fortunately, research funding from the university has allowed us to reach the early stages of nonclinical animal testing from the initial cell manufacturing process. However, further funding will be needed in the future to proceed with the necessary safety studies, animal studies, and clinical studies involving final patient administration. It is also necessary to clear the national system as a separate issue from the financial and technical aspects. Most importantly, we will distribute this treatment technology so that it can be used by ophthalmologists around the world. For that purpose, it is necessary to establish manufacturing technology and storage method for stable mass production of cells. Dosage forms, cryopreservation methods, transportation methods that are easy to use even if you are not a specialist. These are areas that are not the subject of papers, but by incorporating that knowledge into the manufacturing method as soon as possible, we are trying to develop more quickly. 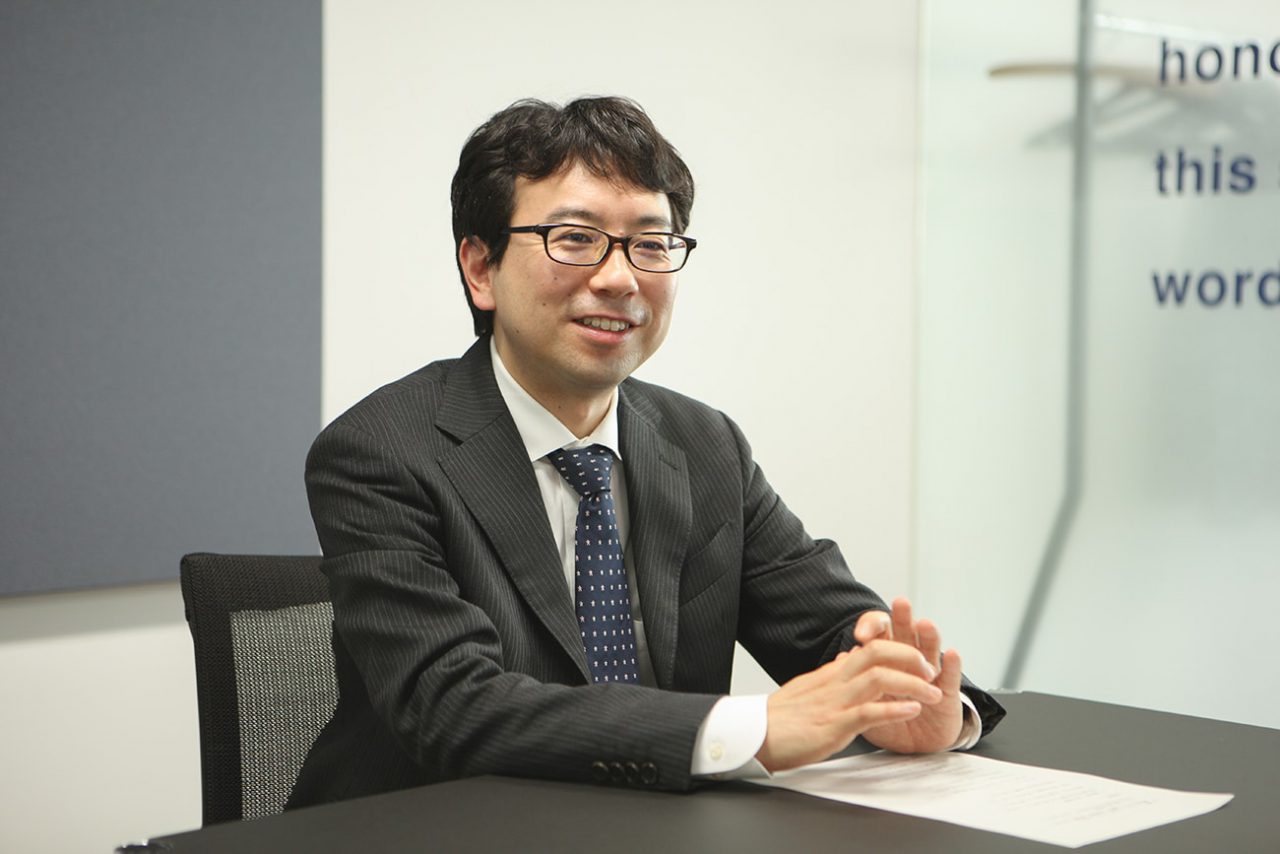 Contributing to the happiness of the world, driven by the idea of "researcher x ophthalmologist"

Two factors that I have experienced, "researcher and ophthalmologist," may have influenced this kind of development. Always keep the idea, "If you are a practitioner, what kind of thing would you like to use?" And utilize it for research and development. No matter how effective a treatment is, it is not easy to introduce if it costs millions of yen each time or requires large-scale equipment. In order to make the treatment method that can be used by doctors all over the world, it is necessary to realize a selling price that can be mass-produced as much as possible and can be introduced in clinics.

And as a motivation to work on development, I think that it is all about the desire to solve social problems. Scientific research is a very steady and harsh world of conducting 100 experiments and finding a 1 percent chance. Even so, I think that we can continue to believe that we want to accomplish this because we have a response when we can take a step forward without forgetting our sense of social mission. To tell my own story, after graduating from Keio University School of Medicine, I became an ophthalmologist after undergoing general gastrointestinal surgery and pediatric surgery. As a doctor, I have followed a unique career path of returning to Keio University. I feel that the two aspects of "researchers and doctors" that we have cultivated in this process lead to the desire to pursue new things, even if we take greater risks than the doctors and practitioners working at university hospitals.

Although there is a treatment called corneal transplantation for bullous keratopathy, there are a large number of waiting patients all over the world, and the number will increase steadily in the future. When this problem is solved by a new treatment method, I would like to tackle new diseases. Among the diseases that require corneal transplantation, we would like to expand the treatment method by regenerative medicine to the diseases of the stroma and corneal epithelium, which account for about 40% other than bullous keratopathy.

For humans, eye diseases are a major issue related to the quality of life (QOL) for living a happy life. We want to contribute to the happiness of people all over the world through new treatment technologies. That feeling is a major driving force for us.